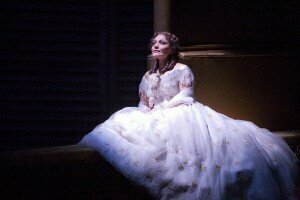 With its story of family feuds and romantic rivalry, The Bride of Lammermoor is particularly appropriate for opera. Donizetti and his librettist Cammarano streamlined the drama, omitting complicated subplots, political references and many of the characters (such as Lucy’s tyrannical mother) to focus on the lovers Lucia and Edgardo. Donizetti heightened Lucia’s plight by writing her an extended mad scene in Act III (not included in Scott’s version), and provided Edgardo with a suitably operatic suicide, rather than Scott’s ignominious fall into quicksand. Full story.